Today, I pulled up to a familiar scene; on the side of the road was a woman holding a sign with her gaze fixed downwards.

If I’m being totally honest with you, my normal tendency is to look away and pretend to be busy since I don’t believe in giving money directly to people and I don’t know what else to do.

But as soon as she lifted her head, it was as if she was waving red flags in my face. She looked young, maybe even 17.

One of my greatest passions is working with young girls who are victims of human trafficking, so as soon as I saw her face, I instantly felt concerned for her safety. Runaways are usually approached within 48 hours of being on the street to be groomed for trafficking.

I sat there in my car unsure of what to do.

I wanted to know her story, to know what kind of help she truly needed. But what was I supposed to do, roll down my window and expect her to spill her guts to me in five seconds before the light turned green?

My time was up and the cars in front of me began to take off.

I was halfway through the intersection and I sensed God say to me, “Well, why don’t you get out and ask her?” To which my heart responded, “That’s crazy.”

This girl wasn’t just on a street corner; she was literally smack dab in the middle of the street between the freeway onramp and off ramp in one of the busiest intersections at rush hour. My one year old son was singing in the backseat and I remember thinking “What do you want me to do Lord, plop my baby on my hip and walk out into the middle of the street to talk to this girl I know nothing about?”

Suddenly, I remembered a concept I had just read about in a book called Divine Opportunity written by Dr. Ryan Montague who is a professor of communication at Azusa Pacific University. The simplified concept is this…

When we feel God prompting our heart to do something, we all experience certain thoughts and emotions: fear, anxiety, skepticism and the like.

The next step is to accept them as a sign that God is prompting you. “Ok Lord, I hear you.”

But the next part is the powerful part…

You are supposed to consider your values and then act on your values instead of your fears.

So I began to think of my values:
I want everyone to experience the hope of God
I want all girls safe from the harm of the streets

I bought myself some time and ran my quick errand that I was on my way to in the first place, circled back to where I last saw her and parked at the nearest parking lot.

The crazy thing was, as I was sitting there trying to pull some resources for her, I realized that I had just visited a Christ centered homeless shelter for women and children just hours before. I wrote down their phone number and a few others for me to give to her. I pulled out a bag of toiletries and supplies that I always keep in my car for a 24/7 response team that I help to coordinate for trafficked girls. I peered my head around the corner to where she had been.

“Well, shoot! She already got in someone’s car!” I secretly felt slightly relieved. But then I took a few more steps and realized she was just covered by the freeway sign. My heart leapt with insecurity again. I went back to my car and started unbuckling my son from his car seat. “Ok buddy, I guess that means we get to do the crazy thing.”

Baby on my hip, my mind was fighting with me the whole way as I walked what seemed like a very long ways and as I waited at two pedestrian crossings to get to this girl.

“What are people going to think of you out there talking to her?”

“What if she asks you for something that you can’t give?”

“What if she’s just straight up crazy?”

Even the automated pedestrian crossing kept telling me “Don’t cross.” Thanks for that negative encouragement!

“Name the emotions, Britney. Act on your values.”

Up close, I could tell she wasn’t as young as I had feared but I was still, nonetheless concerned for her safety.

“Hey, I saw you when I was in my car and I wanted to help but I just didn’t know what kind of help you needed. What’s your story?”

She smiled at me and began to share some details from her life about how she had been on the street since she was 14 and has a hard time finding a job.

I asked her about shelters and services and she had never heard of the nearby women’s home I had just visited, so I told her about it and gave her all the information.

I noticed a bible in her bag and asked her about it and she explained how someone gave it to her while she was standing there.

I warned her about the dangers of trafficking when living on the streets and gave her a bag filled with toiletries.

She was gracious, kind and engaged.

Dozens of cars were zipping past us and my son was getting quite restless so I said goodbye and told her I would be praying for her.

I can’t say anything truly profound happened there on the side of the freeway onramp.  She didn’t leave her post to get the help that she truly needed. We didn’t have a profound conversation about God.

Isn’t it funny how we always think later of all the amazing things we could have said?

But one thing I do know; God wanted this girl to know that she was seen and I got to be the one he used to make that known. How amazing is that?!

As I walked away feeling excited for my first small yes to God’s promptings, a concerned man yelled out to me from his car “Are you ok? Do you need help?” I was, after all, in the middle of the street with a baby talking to a homeless lady. But I now didn’t care what people thought of me because of where I was. I gave him a reassuring smile and thumbs up as I walked towards my car.

Every morning, I pray with my son, “Dear God, please give us eyes to see the needs all around us and help us to be a light wherever we may go.”

Today, God allowed us to be His hands and feet and I feel so grateful that He did.

Don’t stay stuck in your emotions. Act on your values.

Watch Britney’s music video Far From Forgotten, shot in Latvia while she and her husband Jonny served as YWAM missionaries, CLICK HERE

BRITNEY CHRISTIAN MILLER is a singer, songwriter, worship leader and blogger from southern California. Her greatest passion is bringing hope to those who have no hope and working with young girls who are victims of human trafficking. She thrives on using music and writing to bring the message of truth to those who don’t know it and inspiring those who do to live out their faith in powerful ways. Her music, which speaks of finding light in the midst of darkness and keeping faith, has been featured on major television shows and can be heard on Spotify and YouTube. Visit Britney’s website, to watch her latest music videos and to learn more. 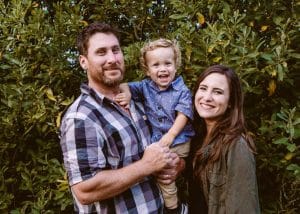