For the beginning of this Fruitful Story, you may want to first read Teresa Ku-Borden’s LIVING IN GETHSEMANE

This second Fruitful story by Teresa is excerpted from her chapter in the book, Voices Rising: Women of Color Finding and Restoring Hope in the City

Teresa is a bi-vocational minister and physician living and working in East Los Angeles. She writes about her journey into motherhood with her son, born with a congenital liver disease, and how the pain and trauma of living in prolonged crisis with a medically fragile child transformed her perspective of cross-cultural ministry and Christian community. She explores her identity as a Chinese-American woman newly introduced to deep suffering, and she uncovers therein the importance of empathy, solidarity and presence–the human kind and the divine…Immanuel: God with us. (Matthew 1:23)

When we returned to our community in East Los Angeles, and to the small urban church we had helped to start, my husband Ryan and I were warmly welcomed back.

Yet people were busy, relationships had changed, and we soon realized that we couldn’t pick up where we had left off. We were strangers in a familiar place, uncomfortable in the place we had thought of as home.

We quickly realized we had no capacity to do any ministry, to serve in the ways we had before and wanted to do now.

We ourselves needed significant support and help to create some sort of stability as new parents of this medically fragile child, who was hospitalized nine times in his first eighteen months life. He would be in the hospital for a liver infection one week, any basic routine in our lives was completely disrupted, and we would be back in the emergency room a few days after we were discharged.

We had never felt more isolated and alone.

We were paralyzed by the trauma of having a very sick child, and we were exhausted. Was the Lord forgetting how hard I worked, how healthy I tried to be during my pregnancy? Had He forgotten how faithful my husband and I had been to His ministry? The sacrifices we’d made?

The ideals and assumptions I had about following Jesus as a naive twenty-five-year-old had completely broken down.

Slowly, a small group of people from our church started gathering around us in support.

These were a mix of friends whom we had led in the youth group and who were now young adults at our church, as well as friends who had relocated to do ministry with us in this community.

They prayed with us, texted us, cooked meals for us, visited us in the hospital, and came over to spend time with us.

Instead of ministering, we were now the ones being ministered to.

When we had no energy to even think about ministry in our community, the community came to us. And as we began to open up about our suffering in this season, our friends—especially the youth we had invested in—began to open up about theirs. These  young people had experienced more than their fair share of suffering, and when we shared our story with them, they had the capacity to connect with us in ours.

We listened to their pain, this time from a different place than we had ten years prior.

They also shared from a place more honest and raw. They not only shared stories of trauma from childhood and of anger about the inequalities in their education and upbringing, but they also began to share their frustration and bitterness toward Ryan and me, when we had mentored them as teenagers.

To be entrusted with their honest reflections about that time in ministry was a privilege and a devastation. Even as it was painful to hear, especially in this difficult season, we knew it was a sacred gift to be invited into these depths.

Our friends felt that we had operated out of a project mentality, rather than from a genuine desire to get to know them as people, as though we were using their community and doing ministry there to feel better about ourselves.

Some of them shared that they were asked to be vulnerable, sharing their entire lives and brokenness with those of us who were leaders, before they were ready.

Others felt that the kind of leadership that was modeled to them did not culturally resonate.

It became clear to us that even as we had earnestly tried to serve our young adult friends, there had been times when we had also hurt them deeply.

Despite our best intentions, we learned from our friends that the power dynamics within the church, between those of us who had relocated into the community and those from the local community, mirrored some of the damaging power dynamics in the broader political, social, and economic arenas in this very resource-poor neighborhood where we lived.

While many in our church from the local community did not express these same concerns, Ryan and I felt led to deeply engage with what our young friends were telling us.

If the pain of our son’s condition and prognosis was real to us, their pain was just as sharply felt.

We needed to take responsibility for how our leadership failures hurt them.

We needed to reflect on ministry itself, continuing the process of learning how to serve in ways that were helpful and not hurtful.

Even though our friends in the neighborhood community  hadn’t experienced the same pain of a desperately sick child, they knew suffering, they knew injustice, and they knew the trauma of having the unexpected and undeserved happen to them—over and over again. They knew that catch-phrases didn’t comfort.

They were not afraid of our suffering, because they had experienced it themselves.

Just by being there, their knowing presence and commitment to prayer brought us comfort and connection. In baring our messy, chaotic lives to our friends, we were invited into a deeper, more complex window into their hearts.

Although our pain was rooted in different sources, when all was said and done, it was still pain that was deep and raw, unfair and unjust.

Somehow, in a divine way, out of this pain arose a kindred connection, and an unexpected solidarity between us.

This second Fruitful story by Teresa is excerpted from her chapter in the book shown below, Voices Rising: Women of Color Finding and Restoring Hope in the City

Thanks for your prayers for Malachi’s healing and blessing. For more on Malachi’s condition, it is explained HERE

TERESA KU-BORDEN is a bivocational minister and family physician, and she serves at New Life Community Church in Lincoln Heights, a Servant Partners related ministry in Los Angeles, California. She received her M.D. in 2010 and is currently living and working in the vibrant community of East Los Angeles. One of her passions is taking care of expectant mothers, delivering their babies and helping them transition into motherhood, something her own motherhood journey has enriched. She enjoys experiencing and creating mixed media art, trying new vegetarian recipes, napping with her babies, and on most days, learning how to stay present and peace-filled as a working mother of two. 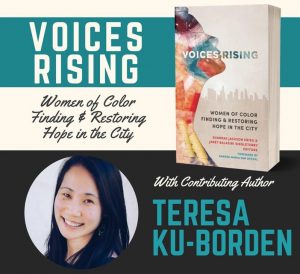