Can you believe we’re here and doing this?

During the past five years, my husband David and I have looked at each other often and said these words. We are just ordinary folks who have spent our entire adult lives together endeavoring to follow the Lord’s leading.

When David graduated from seminary, neither of us had an inkling of where God would lead, but we were happy to follow wherever He led us. It’s been a journey of many years, many moves, many different cities, and several different assignments.

David began in California as a youth pastor, then as a senior pastor in three different states; a college professor at two different Christian universities; and for the last fifteen years of his ministry, he served on the staff of two large churches working specifically with small groups and discipleship.

My career was in public education, so I was always teaching one place or another until 2001 when I began to travel full time as a speaker and author.

Throughout all of these experiences, some more challenging than others, we have worked hand-in-hand among wonderful people and felt God’s blessings repeatedly.

In 2012 it seemed the appropriate time to “retire,” and we stepped into another season of our lives: together, we agreed that we would like to offer ourselves for service if we were needed.

We were willing to go anywhere in the world to teach and serve. Quickly, an offer came to teach at a Bible College near Johannesburg, South Africa. Little did we know then what God had in store for us! 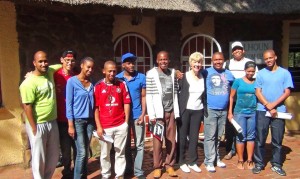 Our assignment in South Africa was wonderful and we were on the campus of a small Bible College with some unbelievably gifted young people—all preparing for full time ministry. The blessings of working with these amazing young people was beyond words and we were so impressed by their dedication and sacrifice.

Across the street from the campus was a large Christian conference center where there was a very large pastors’ conference.  Several hundred pastors were in attendance—what a blessing to worship with our African brothers and sisters. In addition, both of us were invited to present—David about small group ministry and I was invited to speak to the women.

Attending the conference was a young man with the huge responsibility of administering and leading ALL of Africa for his denomination. Until that time, we had not met him, but shortly after the conference, he called and invited us to his office. With tears in his eyes, that young man told us, “Your message about small groups and discipleship is exactly what Africa needs. Would the two of you be willing to commit to returning to Africa for the next three years and spending at least six months here?”

We were speechless, but together we both instinctively felt that this was again God’s leading in our lives. And, of course we agreed to this new assignment.

That three years stretched into four. We completed our “last” trip to Africa in December 2016, but who knows, it may not be our last.

Both of us fell in love with Africa, her people, and everything about that great continent.

During these past four years, we traveled to and through sixteen different African countries. In addition to many flights, we drove over 22,500 African miles.  It was often hot; we sometimes stayed in meager conditions and ate many new foods, but what a blessing.

David was able to train over 5,000 African men and women in discipleship—most of the time teaching through an interpreter. In fact, at this time, his materials have been translated by volunteers into five different African languages. He preached dozens of times, and I spoke to many women’s groups.

So, what did we learn? It isn’t about us, that’s for sure.

Personally, we went to help, and we were blessed beyond measure. It never occurred to us when we flew to Africa in early 2013 the God would open so many new doors.

And, God will open doors at whatever age we may be—the willing and able servant is blessed beyond measure as he or she follows God through each door.

We also learned about the resilience of the beautiful people we met in Africa. David’s training sessions were two days long, and often men and women walked a day or more to attend; they slept on the floor or under a tree, and they ate the most basic foods. Yet, their spirit of dedication and desire to learn brought them by the dozens.

How humbling for us.  When our accommodations were poor—no soap, no air-conditioning, no toilet paper, no electricity—we knew that the precious people whom we were serving were providing to us the best they could offer, and both of us knew that we could last through any temporary inconveniences.

We now know true Saints in the Kingdom of God, real giants of our Christian faith. 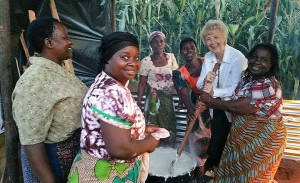 From students to pastors to ordinary people, from West Africa to East Africa, to Ethiopia and a dozen countries in between.

These special people which we now call friends remind me of Hebrews 11:38, “the world was not worthy of them.”

In Zimbabwe, where unemployment is over 90%, we met a pastor and his wife who have grown their church from about 20 to over 300, and they have planted five new churches. But, that isn’t all; they care for hundreds of orphaned children. Even though God has provided them with two beautiful homes in Harare and a 1,000 acre farm, they use ALL they have for their orphans and this humble couple lives in the most basic housing. We were guests in their home for a week—no heat, no indoor plumbing, noisy neighbors, and little room. Yet, their home and their lives overflow with the love of God and with their gracious hospitality.

They never complained, and they often exclaimed, “To God Be the Glory!”

This beautiful couple in Zimbabwe was like many others whom we met all over Africa.

This isn’t about us; it’s about following Him throughout ALL the stages of our lives.

And so, with hearts that lean toward Africa, we await God’s next assignment.

But we have this treasure in jars of clay to show that this all-surpassing power is from God and not from us. 2 Corinthians 4:7

KATHY SLAMP was raised in Alaska and has taught in public schools in seven different states and at all levels, from Kindergarten through college. She was raised in a pastor’s home and is married to Dr. David A. Slamp, a pastor. Through her speaking and writing, Kathy inspires and challenges her audiences to grasp the basic and vital Biblical concept, We are all chosen to carry this amazing treasure: Christ in you is the hope of glory. As Christians in this world, God chooses to use each and everyone of us as His vessels! CLICK HERE  to visit Kathy’s website.