After 16 years pastoring a church in England, Belinda and I never imagined we would wake-up one day in Zimbabwe, Southern Africa, a beautiful nation that is rich in resources but trapped in poverty. Each day God brings us into new adventures and challenges. May we share part of our story with you?

We had spent the entire week looking at spreadsheets, budgets and organizational charts. We looked at each other and knew we were done. In the three remaining hours, it was time for some fun. Our good friend and accountant, Andrew (on the right in the photo above), had travelled in from the UK to chat through a few things and was due to fly back later that day. So, throwing caution to the wind, we abandoned the books and headed to the local game park. In the first hour, we witnessed nothing but a dung beetle going about its business.

Then we came across two men standing on the roadside in green combat fatigues, rifles in hand, flagging us down for a ride. Perhaps naively we pulled over. Our new friend Bongani then said something that changed everything…

“Do you want to see the rhino?”

Of course we did! The dung beetle was amazing, but it’s no rhino. They jumped into the car, rifle resting inches from Belinda’s ear.

It turns out Bongani was a Ranger with the game park, and for the past 12 years his job was to keep poachers away from the rhino.

“Now the white rhino, they are veeeery friendly” he said in his Ndebele English. “But the black rhino, if you see a black rhino, whatever you do, DO NOT RUN“.

Armed with this essential knowledge, we left the vehicle behind and walked deep into the bush. Bongani in front. Me behind. Then Belinda. With accountant Andrew bringing up the rear.

What happened next was right out of Scooby Doo. Belinda tapped my shoulder and pointed to her left. I tapped Bongani’s shoulder and pointed to my left. Bongani had no shoulder to tap but looked to the left. There, no further than 50 feet away, a large grey boulder-shaped thing started to stand and grunt and stomp and generally sounded a bit upset that we had disturbed his lunch. Turns out black rhino’s look surprisingly like large grey boulders, even at 50 feet.

Black rhinos are not friendly. Wait. What was it he said? Oh yes, “Don’t……” And before I finished the sentence, Bongani finished it for me, “RUUUUUUUUUUN”.

It turns out Bongani was a much faster runner than the rest of us, especially Andrew who we left behind.

As it turns out, we all survived; with a great story to tell our future grandkids, about the day we outran a black rhino. (If truth be told, he ran the other way, but that’s not the version our grandkids will hear)

WHATEVER YOU DO, DO NOT RUN

One year earlier I had been lead-pastor of a church in the south of England for the past 16 years. I was emotionally, physically, and spiritually exhausted. I was ready for a break. Ready for a change. The church had gone through many very positive phases; it had more than doubled in attendance, meeting in four congregations across three venues.

However, I knew my judgement wasn’t as sharp and I was finding it difficult to make clear decisions, signs that I needed a break.

I had been promised a sabbatical for some time but taking a ‘three-month paid vacation’ was not universally applauded.

There is a stressful dynamic in church leadership, which is neither seen nor recognized nor understood by people who are not in leadership.

Leading a team, responsible for the spiritual lives of a thousand people, was taking its toll on my wellbeing.

Something started to shift in my thinking…

All the sort of questions people in mid-life are asking. Thankfully, I still deeply loved my wife. But I was left with many unanswered questions…

At the same time, a handful of people saw me as the problem, and my sabbatical was their solution. On the first official day of my three-month sabbatical, I learned that a complaint letter had been received which had been written by a former church member outlining my many failings. I was devastated and deeply hurt. In hindsight, this letter should have been addressed by other leaders in our church, but instead, every page became like kindling. And the fire was lit.

I hadn’t failed or morally fallen. I’d made mistakes but to me that was part of learning. I thought things were still going ok. I couldn’t understand what was happening. To have this pressed upon me in the way that it was, made no sense.

Looking back, I know that some of my reaction was pride.

But in my defense, I was exhausted. My entire identity had been wrapped up in being a ‘successful church pastor’ and now this was slipping away. My reputation, character and integrity came into the spotlight, and not in a great way. We heard rumors circulating of my affairs, theft and deception.

It became the most painful point of our lives.

Simply by association, Belinda was equally blamed. But for what, we really don’t know. She had spearheaded so much in the life of the church, in particular raising up women. As a result, many women stepped into their God given roles, which, on reflection was an amazing legacy to leave.

Our grown-up kids were not immune either. We couldn’t hide it from them. They could see we were broken and they spoke into our lives with such richness and wisdom and depth. They were no longer our little kids, they pastored us through many difficult days.

We found ourselves in this incredibly tough and increasingly bizarre situation.

We gathered with trusted friends and prayed for breakthrough. They were amazing and supportive. And this reinforced the importance of having true friendships at times like this.

At the same time, others were praying for my departure. In their eyes, that meant ‘being called’ to go elsewhere. Soon.

It was like some game of cosmic tug of war. The fact that Belinda and I are now in Africa gives some indication of how God chose to answer all of our prayers.

Now, you may have picked up, I sometimes use humor to deflect the seriousness of the situation. I think it’s a British thing. But this was serious. And for a long time, we were in a seriously bad place; emotionally all over the place. Shipwrecked. For someone who had been lead pastor of a church for 16 years, I wasn’t looking good.

To be fair, now nearly three years on it is still difficult. Even after carving out a new life in Africa, we still struggle when triggers remind us of what we have been through.

Back in the day, I used to simplistically lead people in prayers of forgiveness. I never really appreciated how un-simple forgiveness can be. Forgiveness is key, but it’s not easy. We had a handful of people saying unkind things, but we know that many people face far more pain and trauma than we’ll ever know.

Some profoundly supportive people helped us to make sense of things again, enabling us to rediscover our direction and perspective. The faith that had left us began to return.

Right now, we find ourselves living in Zimbabwe, in Southern Africa. And we love it.

For the record, we definitely won the tug of war (even if it looks like we came second).

In brief, we arrived in Bulawayo the same week as a global pandemic. Our return flights were cancelled, and we found ourselves locked out of the UK and locked into God’s plan. We spoke with our kids. Spoke with our parents. We resigned from our jobs at the church in the UK. Started a business. And stayed in Africa.

We questioned some of the journey and detours along the way, but not the destination.

What God is unlocking in Zimbabwe right now, is beyond what we could ever imagine.

We look back with sadness and regret at how it could have ended differently. I am not pointing the finger of blame anywhere, only at myself and the lessons learnt. And we know, that if it wasn’t so final, we would have straddled two worlds, rather than jumping in, both feet, onto African soil.

Some may think that we ran from the situation, that we should have stayed and faced them down. One day, our decision may be understood. Maybe not.

What we face in life, isn’t always fair. Or friendly. Things rise and jump out when we least expect them. It provokes lots of questions. Why didn’t God protect? Why did she die? Why did he get cancer?

It’s how we respond that matters. Not necessarily at the time but over the course of time.

The writer to the Hebrews says…

Let us hold unswervingly to the hope we profess, for He who promised is faithful. Hebrews 10:23

And that’s the bottom line. When things don’t go the way we script them, we can somehow still hold on; even if it’s with fingertips. For he is faithful. He is full of faith. Not in our ‘hit and miss’ ability to handle things, but in His ability to see us through.

We may not always feel it. See it. Know it. But His faithfulness remains true because He remains true, giving us hope. And that’s the promise.

If you are reading this and life is nothing like the script you hoped for, hold on. Don’t swerve. Do not run. He’s running towards you right now.

Or as they say round here, khonapho khonapho. He’s coming now now.

Learn more about what Graham and Belinda are doing in Zimbabwe and join their Prayer Team, CLICK HERE

From time to time, people ask about our work and whether they can help in anyway, learn more about giving from the USA, UK and elsewhere. CLICK HERE

Graham can be reached at [email protected]

GRAHAM MARSH and his wife Belinda, from the UK, are now living in Zimbabwe, Southern Africa. For sixteen years, they were senior leaders in a church on the south coast of England. Without doubt, it was an amazing journey with some incredible people. In 2019, they became increasingly aware that things were changing and a new story was emerging. Graham and Belinda became convinced it was time to move out and step into the world in which we live. So they did. They stepped out of Eastbourne and into God’s bigger story. A story we hope others will join. 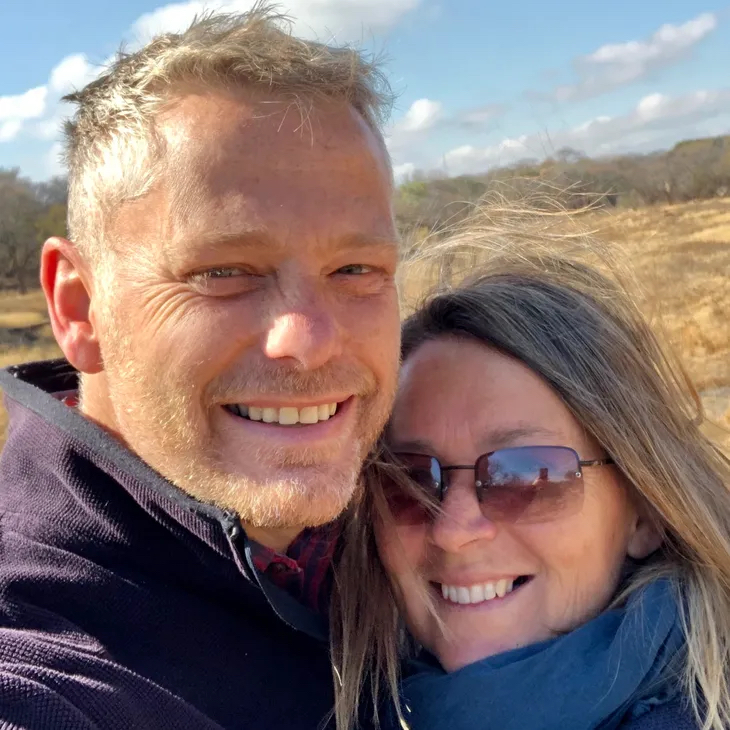